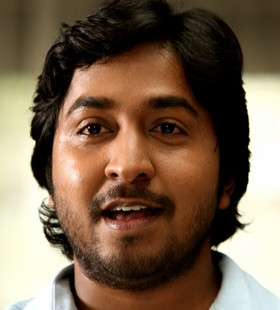 DO YOU KNOW?
He is an Indian playback singer, film actor, director, and screenwriter. He is the son of actor and screenwriter Sreenivasan. He started off his film career as a playback singer for musicals, as well as music albums such as Coffee @ Mg Road. Vineeth made his acting debut in Cycle (2008). His well known films include Makante Achan (2009) and Chappa Kurish (2011). In 2010, Vineeth made his directional debut with Malarvadi Arts Club. His second film was the blockbuster Thattathin Marayathu (2012). His third film was Thira (2013) in which he introduced his younger brother Dhyan Sreenivasan.

A mechanical engineer from KCG College of Technology, Chennai, Vineeth Sreenivasan is the son of noted Malayalam screenwriter and actor Sreenivasan. He is a part of the band Malayalee with Jakes Bejoy, Shaan Rahman and Arjun Sasi. He has also acted as one of the main protagonists in the Malayalam film titled Cycle which did well at the box office. Vineeth did his second movie role with his father in the movie Makante Achan.

He writes the lyrics of most of his album songs and has also shown his direction skills, directing his own music videos. His music album Coffee @ MG Road became a super hit instantly. He got first prize in Mappilappattu in the Kerala State Youth Festival 1998, where he outshown his ability for quick wit. When he was asked whether his father liked him singing Mappilappattu, he answered, "He didn't have any hatred towards my Mappilappattu, to my knowledge."

Vineeth won the AMMA Best Male Singer Award 2008 for his songs "Mampullikkavil" and "Jillu Jillu" and also the Best Male new face of the year 2008 by Asianet, for his role in Cycle. Vineeth wrote the script and Lyrics and debuted as director for the movie Malarvadi Arts Club with seven new young actors. He won the Asiavision award for the best debutant director for Malarvadi Arts Club. Thattathin Marayathu is the second movie in which he was the screenwriter, director and playback singer. His third movie Thira released in 2013 in which he introduced his younger brother Dhyan Sreenivasan.

Vineeth married his college sweetheart Divya Narayanan on 18 October 2012, after an eight-year-long relationship. She was his junior at KCG College of Technology in Chennai.