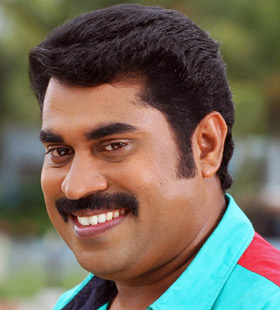 DO YOU KNOW?
Venjaramood V. Suraj is born as the second son of Venjaramood Vasudevan Nair, a retired soldier with the Indian Army and Vilasini, a housewife. He was called by his father, mother and relatives by the name “Kuttappan”. His elder brother V. V. Saji is currently serving in the Indian Army. His elder sister Sujatha is married and settled in Thiruvananthapuram. Suraj also wanted to serve the Army after completing his Secondary School Leaving Certificate, but had to give up as he broke his arm by falling from a bicycle. He had his primary education from K.V.M.L.P.S, Venjaramoodu. He completed his Mechanical course from Attingal Government ITI and turned to mimicry acting soon after that. His breakthrough came when he acted in Jagapoka, a comedy program which was broadcast on Kairali TV.

In 2005, Suraj married Supriya at Vaikuntam Auditorium, near Padmanabhaswamy Temple. They have three children: Kashinathan, Vasudev and Hridya. His son, Kashinathan, has acted in films Annan Thambi and Teja Bhai & Family.

Suraj started his career as a stand-up comedian. His mimicry shows were a success with the audience. He first acted in a film named Jagapoga which was a spoof of Malayalam movies. He played the role of Pachan as well as Dadasahib in this film. He is generally regarded for his artificial mockery of the Thiruvananthapuram accent for which he is largely criticized. So far Suraj has acted in more than 100 films and have played the hero role in the films Duplicate and Thaskara Lahala. He is known for acting in the films Arabikatha, Ivar Vivahitharayal, Annan Thambi, Veruthe Oru Bharya, LollyPop, Gulumal: The Escape, Sakudumbam Shyamala, Adaminte Makan Abu and Perariyathavar.

He won the National Film Award for Best Actor at the 61st National Film Awards for the film Perariyathavar, directed by Dr. Biju. The story of the film revolved around a father and son working as Municipality workers and the harsh life they face. Noted filmmaker and jury chairman Saeed Mirza, while announcing Suraj’s award in a press meet, said: “Suraj has played a municipal sweeper [in the film] but it is an incredibly dignified performance. He excels in comedy but in this film Suraj has brilliantly played a reticent character. I would not have been able to sleep had his name not been in the list of awards.