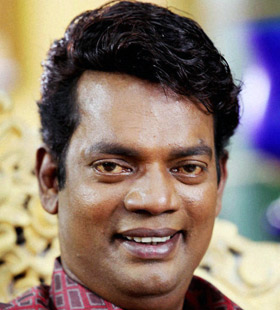 DO YOU KNOW?
Salim Kumar (born on 10 October 1969) is an Indian film actor and mimic predominantly acting in Malayalam cinema. Salim Kumar is one of the prominent comedian actors of the current generation in Malayalam cinema, but has shown his versatility in the drama genre of films, such as Achanurangatha Veedu, Gramophone, Perumazhakkalam and Adaminte Makan Abu. His role as Abu in Adaminte Makan Abu won him both the National Award and Kerala State award for Best Actor for the year 2010. Earlier he had won a Kerala State Film Award for the Second Best Actor in 2005 for his role as Samuel in Achanurangatha Veedu.

He attended the Govt. Lower Primary School, Chittattukara North Paravur and went to high school at the Govt. Boys High School, North Paravur. He completed his Pre-Degree education from Sree Narayana Mangalam College Malyankara, Moothakunnam. He wanted to become a singer at an young age but later took up mimicry. He graduated with a BA from Maharajas College, Ernakulam where he won the University title for Mimicry thrice. He started his stage career at Cochin Kalabhavan. He was also a performer in Comicola, a comedy program on Asianet. For about four years, he was associated with professional drama in Arathi Theatres, Cochin.

He is settled in North Paravur-Ernakulam District. The name of his house is “Laughing Villa”. He is married to Sunitha and the couple have two sons, Chandu and Aromal. He allies with the UDF party in Kerala, especially with the late political leader K. Karunakaran. He has written his memoirs in a book named Ishwara Vazhakkillello.