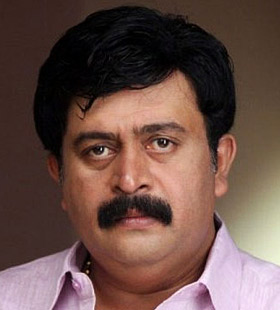 An actor with vivid and profound acting skills, Sai kumar is the son of the acclaimed Malayalam actor Kottarakkara Sreedharan Nair. Saikumar debuted in the 1977 film Vidarunna Mottukal as a child artist. The actor is known for his versatility in performance, be it a character role, villain role or supporting role.
Sai kumar’s abilities as an actor was first recognised through theatre. His career in movies is one that is complete with a wide range of characters in over 150 movies. He has also lent his voice for Sathyaraj in Aagathan (2010) and for Thiagarajan in Thilakkam (2003).
Sai kumar’s lead role in Ramji rao in the year 1989 speaking was a break which earned him significant roles in movies like Souhridam (1991), Thudarkadha (1991), In Harihar Nagar(1990), Ghoshayathra, Thoovalsparsham(1990), Anantha Vruthantham(1990) during the 90s.
During the late 90’s and early 2000s Sai kumar, as an actor captured hearts handling villain roles. His roles as the antagonist in movies like Narasimham (2000), Thandavam (2001), and Chathurangam (2001), Valliettan (2000), Vesham (2004) and Kunjikoonan (2002) were highly acclaimed.
He won Kerala State Film Award for Second Best Actor for his performance in the 2007 film Anandabhairavi.