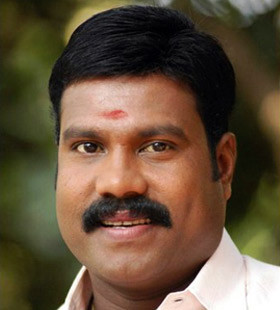 DO YOU KNOW?
Kalabhavan Mani is a South Indian actor and singer. He began his career in Malayalam film industry, later he became a busy artist in Tamil and Telugu industry, especially in villain roles. Although he began his career as a comedian, Mani proved his versatility roles such as serious actor, heroic and villain. He has acted in a number of Malayalam and Tamil films. He proved his acting talent in Vasanthiyum Lakshmiyum Pinne Njaanum, in which he plays a blind street singer. He has won National Film Awards and Kerala state film award in 1999 for Vasanthiyum Lakshmiyum Pinne Njaanum.

He started his career as a mimicry artist in Kalabhavan, Kochi. He started his acting career in the Malayalam film Aksharam as an auto rickshaw driver. Since then, he has acted in several movies as a comedian. His first serious role was in Vasanthiyum Lakshmiyum Pinne Njaanum. He has acted in more than 80 films in Malayalam and more than 20 in Tamil.

He is also a professional playback singer and a singer of Nadan Paattu (folk songs). His first album was Kannimanga Prayathil. Mani has since established a parallel industry of ‘Nadan Pattukal’, selling a record number of releases. He has released a few religious songs and Mappila Pattukal.

Mani’s career started portraying comedic roles primarily in Malayalam films; he later shifted to serious roles. Eventually he became popular all across South India portraying negative characters in an unusual style. Despite all the popularity, Mani is known for his down-to-earth personality and for providing humanitarian aid to people in need.