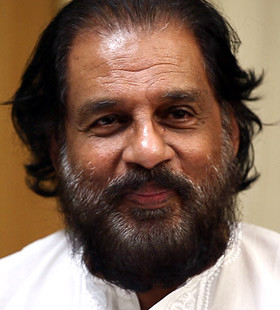 DO YOU KNOW?
If people on this world are envied to our country especially our state it is her natural beauty and gifted musicians. The passion of music has no barrier of languages; it is the universal language of your soul. In a country where the cultural heritages ever persist, like ours, music remains as an ideal integral of secularism. The ornaments, and the amusements of life, are restricted to values where music is priceless. Anyone with an imaginative mind can feel and float in music. As Shakespeare said, “If music be the food of love, play on”.

Padmashree Dr. K. J. Yesudas is second to none in the history of Indian music. He conquers the dual sphere of light music and classic music. His supremacy in the field of music is unparalleled to the rest in the continent. He made his first stage appearance at the age of 12. He is the only singer in India who bagged the National title for the best singer four times in a row. He has already sung more than 30,000 songs in different languages. The only two Indian languages where he hasn’t entered are Kashmiri and Assamese. His Malayalam film song collection exceeds 4500. He has already recorded in several songs in Tamil, Kannada, Tamil, Gujarathi, Telungu and Bengali.

Born on 10th of January 1940 in an ordinary family as the son of Mr. Augustine Joseph Bagavathor (musician) and Mrs. Elizabeth at Fort Kochi, Padmashree Dr. K.J. Yesudas had to struggle during his childhood even for continued education. After obtaining diplomas in Sangeethabhushanam and Ganabhushanam, he was denied chances for singing in Akashawani (All India Radio) and also during his first attempt in one of Kunchacko’s film “Nalla Thanka”. Finally he got a break with the song “Jyathibhetham Mathadheshwam, Ethumillathe sarvarum sodharathewna vazhunna Mathrukasthanamanithu” in the film “Kalpadukal” (foot print) in the year 1961. He was closely associated with the famous Kalabhavan, the workshop of music, for years. His voice is the most popular one in the hearts of Malayalees. His voice holds the pride of being recorded the maximum number of times in Malayalam, language.

In his early years, young Yesudas was a serious Mohammed Rafi fan. These two singers embody the confluence of a very lovable personality with a divine voice; their careers have been motivated not by money or other personal gains, but by eagerness to discover the various waves of the ocean of music.

His first song as a playback singer (non-Hindi movie) was for the movie Kalpadukal (1961). His first Hindi song was for the movie Anand Mahal, with music given by Salil Chowdhury who shared a long standing relation with the singer. Fondly remembered songs of the duo include songs from movies such as Nellu, Vishukkani, Chuvanna Chirakukal, Ee Gaanam Marakkumo – to name a few. The trio combination of Salil-Yesudas and Prem Nazir (the evergreen hero of Malayalam Cinema) took the Malayalam Cinema Industry of the 70’s by storm. As a matter of fact, it was generally agreed that Yesudas’s voice was the most ideal one for Prem Nazir.

Yesudas’s talent was discovered by Salil Chowdhary and nurtured by Ravindra Jain in Bollywood, Yesudas’s most popular Hindi songs are from the 1976 movie Chitchor, with music given by Ravindra Jain. The greatest tribute paid to him is cited during an interview with Ravindra Jain, wherein the blind music director confessed that if he ever happened to regain vision, the first person he would like to see was Yesudas. Yesudas’s greatest association in Hindi was with Ravinder Jain and the duo combined to produce memorable including Oo Goriya re (from the film Naiyya – directed by Prashanth Nanda),Sunayna (from the film Sunayna. The film in which Yesudas sang the most memorable Hindi songs is claimed to be Saawan ko aane do with music given by the notable late Shri Raj Kamal. Songs like Jaanam, Chand jaise mukhde pe and Tujhe Dekh Kar Jagwale Par (from Saawan Ko Aane Do), Kahan se aaye badra (from Chasme Baddoor),Ni Sa Ga Ma Pa (from Anand Mahal) etc leave even the lover of modern songs spell bound. During an interview with Spice Music Channel, he told the interviewer that a song he sang for the unreleased Hindi movie ‘Tansen’ was his all time favorite song in Hindi.

He has sung more than 30,000 songs for thousands of Indian movies in many languages including Tamil, Hindi, Kannada, Gujarati, Telugu and Bengali through his long career. He was also invited by the Soviet Government to perform at music concerts in various cities of the U.S.S.R in 1965.

Among hundreds of honors during his career, following are the most thrilling ones. Earlier in 1976 he won the coveted “Sur Shringar Samsad” Award. The ex-president of India Neelam Sanjeeva Reddy gave him the “Geetanjali” as a symbol of national integration. For his outstanding contributions to classical music, the President of India bestowed the ‘Padmashree’ in 1984. Bagging the best film singer award in 1993 for the malayalam movie Soapanam made him the first singer ever to get the national award four years in a row; the three other awards were for “His Highness Abdullah” (1990), “Bharatam” (1991) and “Sargam” (1992). Having risen to fame initially as a film singer has made his rise to the status of a top class classical singer slow and fraught with skepticism. Yesudas as a classical giant had been taken more seriously after his famous concert at the Shanmukhananda Hall in Bombay when Chembai Vaidyanatha Bhagavatar gave him the congratulatory shawl. A similar spontaneous response also came at the esteemed Madras Sahitya Academy from the maestro Balamurali Krishna. “Chitchor” also won him a Film Fare Award in 1980. In 1991, he received the honorary degree from Annamalai University in receipt of his priceless contributions to music and art. In the same year he received Latha Mangeshkar Award. He is also the recipient of 18 Kerala State Awards, 8 Tamil Nadu State Awards, 5 Karnataka State Awards, 4 Andhra Pradesh State Awards, and one Bengal State Award. He also received “Star of Cochin Award” in 1992 and subsequently Government of Kerala acknowledged him as “Asthana Gayakan”.

He has already sung more than 30,000 songs for thousands of Indian films in various languages. In 1965, he was invited by the Soviet Government to perform music concerts in various cities of the U.S.S.R. Yesudas is the recipient of The Kerala State Playback Singing Award 16 times since 1970. The President of India conferred on him the coveted title of Padmashree in 1973. Other titles and prestigious awrds he has received include, `Sangeetha Raja’ in 1974, `Sangeetha Chakravarthy’ in 1988 and `Sangeetha Sagaram’ in 1989. He received the award for the best playback singer for the year 1988 from Tamil Nadu Government and Andhra Pradesh Government respectively. Annamalai University honored him with a Doctorate in 1989. The Government of Kerala and `The Sangeeta Nataka Akademi’ conferred the title of `Aashtana Gayakan’ – to Yesudas in 1992. The Government of Madhya Pradesh gave the `Annual Latha Mangeshkar Award’ to Sri Yesudas in 1992. Yesudas is the receipient of the 1991 National Award for the best Playback singer. This is the 6th National award that Yesudas has received. The 1992 Tamil Nadu State Government award for the best playback singer was given to Yesudas. For his unique contribution in the field of Music, he was selected for the prestigious NATIONAL CITIZENS AWARD in 1994.

Inspite of the various accolades and awards that have embellished his career, in person Yesudas remains extremely humble and direct. A down-to-earth nature is the best word that can be used to describe him. His approach to life has always been musical, that of a saint who worship music as his god, that of a pilgrim who goes on a pilgrimage in search of solitude and the real essence of music. His family is blessed with his devoted and dutiful wife Prabha and his three sons, Vinod, Vijay and Vishal. Vijay, is second son, has the inborn talent of his father to carry on the hereditary tradition to the next generation.

Dr. Yesudas is happily married to Prabha for more than 30 years. They have three sons, Vinod, Vijay and Vishal. The second son Vijay Yesudas, is a budding musician . The family is currently settled in Madras, India

Yesudas has recorded over 50,000 songs and has won scores of accolades including the coveted Padma Shri (1975), Padma Bhushan (2002) and seven National Awards for Best Playback Singer. He is the only singer who has been accorded the title Asthana Gayakan (official singer) of Kerala State.