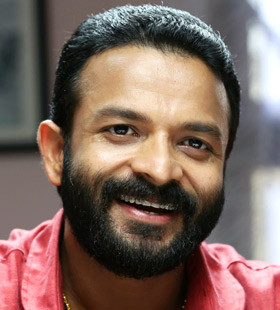 Jayasurya became popular among family audiences as an anchor in musical programs on Malayalam television.’Jagathy Vs Jagathy’ (Surya TV) is one of the famous show he done during early stages. He also played minor roles in films. Notable among these was the comedy artist in Aparanmar Nagarathil.

He entered the Malayalam film industry through the movie Oomappenninu Uriyadappayyan, directed by Vinayan in 2002. The film launched two newcomers: Jayasurya and Indrajith. The film’s advertisements featured the young actors as replacements to reigning superstars Mammootty and Mohanlal. Jayasurya played the role of a deaf and mute young man falling in love with a rich, mute young woman played by Kavya Madhavan. The film did fairly well in the box office and was remade in other South Indian languages with Jayasurya in the lead role.

The years 2002 and 2003 were the age of newcomers; the superstars seemed to be fading. Though he acted in flops like Pranaya Mani Thooval and Kattu Chembakam, he was considered a promising talent for the coming years. In 2003, he acted in Swapnakkoodu with Prithviraj and Kunchacko Boban. The film, which featured Malayali students studying in Pondicherry, became one of the rare campus hits in Malayalam. This film marked the beginning of Jayasurya’s long-term pairing with Prithviraj. The duo went on to act together in a number of films. Jayasurya’s next appearances were in the back-to-back mega hits Pulival Kalyanam and Chathikatha Chanthu, directed by Shafi and Rafi-Mekartin respectively. It was very rare in the Malayalam film industry to have back-to-back hits, and it seemed Jayasurya was set to be the next big star. However, the success of the films worked more for the comedian Salim Kumar.

By 2005, superstar movies came back to prominence and fewer opportunities were given to young actors. In 2006, Jayasurya and Kunchako Boban appeared in Kilukkam Kilukilukkam, a sequel to the historic hit Kilukkam. Mohanlal made a guest appearance in the film. Jayasurya acted with Mammootty in Bus Conductor. In 2007, he again played relatively minor roles with Suresh Gopi in Smart City and Kichamani MBA. Then, in the mega hit Classmates, he played the role of Satheesan Kanjikkuzhi, an aspiring student leader. The slightly negative character role opposite Prithviraj helped to rebuild his image.

Again, he was cast as a villain opposite Sreenivasan in Lal Jose’s Arabikkatha, which was a hit. This followed villain roles in Hareendran Oru Nishkalankan and Kangaroo. He played a variety of roles in 2007–2008: the romantic lover with a comic touch in Chocolate, the serious police officer in Positive, the humorous drama scriptwriter in Shakespeare M.A. Malayalam, the small-time thief in LollyPop, the supporting role in Love in Singapore, and the young politician in Balachandra Menon’s forgettable film De Ingottu Nokkiye.

In 2009, Currency portrayed him in a completely new look but was a failure at the box office. His other releases — Ivar Vivahitharayal becomes his first solo hero hit, again he played a hero in Oru Black and White Kudumbam kalabhavan mani played as his fathers role, his last release of that yearGulumal — co starred by Kunchako Boban gave a good end to a successful year in his career. other films he played that year were lollipop, love in Singapore, dr. patient, vairam, kerala cafe, robin hood, and patham nilayile theevandi.

Cocktail (2010) gave Jayasurya an uplift, and was noted as a high calibre actor. This resulted in having numerous offers in the next year. In 2011, he appeared in 20 get-ups in T. V. Chandran’s fantasy film Sankaranum Mohananum. The same year, he did the lead role in Beautiful which went on to become a great critical success. He played the role of a paraplegic named Stephen and was well received by audiences and critics alike, all saying he has shown the best performance till date. Janapriyan and Beautiful were his commercially successful films of the year. In an year-end report on Malayalam cinema, Deepika newspaper applauded Jayasurya for choosing right roles and chose him as the “Star of the Year 2011”.

Despite having a bad start in 2012 with two films failing to succeed, he made a comeback in getting critical acclaim in films such as Trivandrum Lodge and Husbands in Goa which were released on the same day. Jayasurya had been appreciated for his performances in both films, which had highlighted a well acted performance in two different genres of the films. In 2013 he appeared in commercially successful films such as Mumbai Police and Hotel California. His performance in Shyamaprasad’s English as a Kathakali artiste-turned-waiter who is an illegal immigrant in United Kingdom won immense critical praise.

Jayasurya turned producer in 2013 with Punyalan Agarbattis, which turned out to be success in the box-office and entitled him of a ‘superstar’ title. He has worked with notable actors of Indian cinema, including Mammootty, Mohanlal and Kamal Hassan.