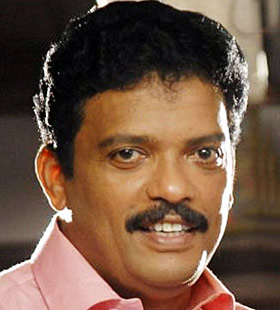 Jagadish is a much loved Malayalam actor and screenwriter who made his debut in the movie My Dear Kuttichathan in the year 1984. Jagadish’s best loved characters belong to movies like as In Harihar Nagar, Godfather, Hitler etc.

A post graduate M.Com. rank holder, Jagadish’s has worked as a bank officer and a college lecturer before becoming an actor.

Jagadish’s skill as a writer became evident with movies like Mazha Peyyunnu Maddalam Kottunnu, for which the story was written by Jagadish, Manivathoorile Aayiram Sivarathrikal and Adhipan for which dialogue and screenplay respectively were by Jagadish.

The actor though has done lead roles in a number of movies during the 1990s is best remembered for his comic performances.

Jagadish who was born to K. Parameshwaran Nair and P. Bhasurangi Amma on 12 June 1958 in graduated with a Master of Commerce from Mar Ivanios College, Nalanchira, Trivandrum under the University of Kerala with first rank. Jagadish is married to Dr. P. Rama, and the couple has 2 daughters, Ramya and Soumya.