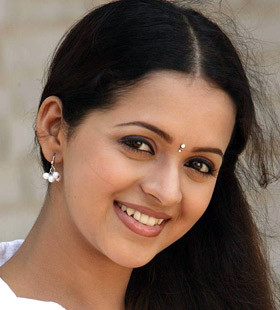 Bhavana was born in Perinkavu, Thrissur, Kerala, the daughter of Pushpa and assistant cinematographer, G.Balachandran. She has one brother, Jayadev, who currently lives in Vancouver, Canada. She studied at Holy Family Girls’ High School, Chembukkavu, near Kerala state zoo Thrissur. Bhavana, who describes herself as a restless and a confused person and someone who’s “hard to handle”, states that she had grown up with a dream to become an actress. She recalls that, as a five-year-old, she used to imitate actress Amala’s scenes from the Malayalam film Ente Sooryaputhrikku in front of the mirror and was even willing to jump from a building and break her arm, like Amala’s character did in the film.

She is the brand ambassador along with actress Mythili for team Kerala Strikers for the Celebrity Cricket League (CCL), captained by Mohanlal, who is also one of the owners of the team, and vice-captain Indrajith.She has acted in many advertisements.

At age 16, she debuted in the Malayalam film Nammal opposite newcomers Siddharth, Jishnu, and Renuka Menon. The film was a big success and she got several offers in Malayalam. She won many honors and a Kerala State Special Jury Award for the film. Bhavana was an 11th standard student when she got her break in films. She has acted with almost all actors in Malayalam cinema. She has got many offers lined up in Tamil and did many projects with famous Tamil actors like Ajith Kumar, Madhavan, Jayam Ravi, Bharath, Jiiva and Srikanth. She has been doing glamorous roles since 2008.

In 2010, she starred in her first Kannada film alongside Puneeth Rajkumar acted in Jackie which was a blockbuster. Following the film’s huge success, the film was dubbed into Telugu and Malayalam. Bhavana was said to star with Emraan Hashmi and Amitabh Bachchan in an upcoming Bollywood film. Her second Kannada film Only Vishnuvardhana with Sudeep opened to a big response.