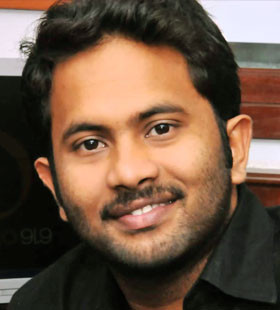 His second collaboration with Vineeth Sreenivasan, Thattathin Marayathu (2012), created a bigger mark at the box office and his performance was praised by the audience and critics alike, as it turned out to be a blockbuster.

Aju Varghese was born to Er.Vargheese and Er.Celiene in Thiruvalla a City in Pathanamthitta Dist, Kerala.He has a younger sister Anju. He is married to Augustina.
Aju did schooling in Rajagiri High School Kalamasserry in Ernakulam. Later he did his schooling from Bhavans Adarsha Vidhyalaya, Ernakulam. He did his Bachelor’s in Electronics and Communication Engineering from Hindustan group, Chennai in 2006.

He was working with HSBC in Human Resoucres, Chennai.It was During that time he was called by Vineeth Sreenivasan his college friend, to play one of the lead role in his directorial debut Malarvadi Arts Club and later in Thattathin Marayathu. In mean time he was part of “Sevenes” (2011) by veteran director Joshiy and “Mayamohini” which was another blockbuster of 2012.